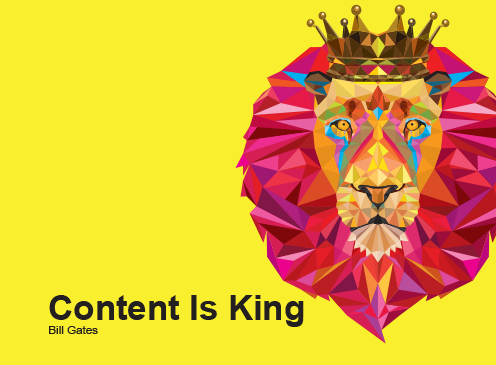 It was the 3rd of January 1996 when Bill Gates coined the phrase ‘Content is King’.
Back then, Microsoft ruled the world, Yahoo was king of the search engines and Mark Zuckerburg of Facebook was only 11 years old. Yet despite the passage of time, explosion of technology and buzz of social media, those words still ring true. In fact, more so now than they ever did. Recent research shows 70% of all marketers are actively investing in content marketing. (HubSpot, 2020).

But in a world that’s exploding with information; is adding your voice to the conversational mix any better than adding an advertisement to the cacophony of sales messages out there? Does it work? Should we bother?

A Little Less Conversation
Let’s face it, marketing has a bad reputation. Because the whole concept of marketing is based on interruption and repetition: marketeers delight in finding something buyers like doing, and then interrupt them from doing it. Not only that, but many of these unwelcome sales messages over-promise and under-deliver; making them dishonest as well as irritating. They rarely focus on the market needs, but rather on the fantastic features of a new whizzy product or service.

The result?
72% of people think companies lie in their advertising. Whether you’re selling socks to sportsmen or widgets to wholesalers, there’s a lack of trust.

Good quality content opens up a dialogue. It removes the hard sell and it allows people to interact with your organisation on a different level.

Content allows you to build engagement and start conversations in a way a hard sales message just can’t.

The beauty of good content is that it can be relevant and useful at any stage in the sales process.
By engaging with the market, you can work out what it values and tailor your approach and communications accordingly.

Unlike advertising, which only joins the conversation when it wants to shout “Buy mine!”, content allows you to nurture leads, convert them to sales and keeps the engagement and communication going long after they have become a customer.

As buyers move from strangers to prospects and customers to ‘fans’, they go through a series of considerations based on their trust levels.

The trust requirement is at its highest in the initial stages where scepticism is rife. Soon after purchase, buyers also go though a phase of post purchase justification where they look for external reassurance that they have made the right decision.

Your well crafted content, that backs up your positioning and the buyers’ needs, not only allays their fears at these important phases, but can also generate referrals and drive word of mouth.

Long Lunches & International Travel
Cast your mind back to years gone by. The carefully constructed press release, the sycophantic call to the publication editor, the quid pro quo advertising space… getting any sort of PR published seemed like a fine art; a club you needed to be a part of.

Now, there’s no need to plan strategies around feature lists or carefully craft your story around the editor’s preferred style. Content marketing turns everyone into a publisher.

Your views, news, opinions and voice is there to be shared with the world, across well connected networks and influencers, and quicker than you can say ‘colour separation charge’.

This is a revolution for organisations.
Desperate for a unique identity, having the freedom to create your own content, in your own style, develops a unique personality for a business. Unlike a new, unique product feature which doesn’t stay unique for long, your content positioning is yours to mould.

Whilst many organisations are afraid to take part in a gritty debate for fear that a controversial viewpoint may be taken out of context, it can be an invaluable way to get people engaging with you. It shows that they are interested; in your industry and your offering.

Getting a debate going allows you to establish your brand as one that shares passion, opinion and is willing to lead thought on key subjects.
In the modern world, you have to innovate to stand out. It is no longer about a fantastic invention or cutting edge design, it is about taking a new position.

Market leaders speak up, they speak out and they lead the way in their sector. Content is an extremely effective way to reflect and reinforce that position.

ROI
Return on Investment. It’s what every business wants. But where marketing is seen as an unnecessary expense, is all this content just another expensive to do, impossible to measure trends?

Think longevity.
Take paid search for example. This is a channel that requires an ongoing investment of both time and money to be effective.

Content on the other hand is a one time investment. One thought leadership piece on a cutting edge trend stays there as long as you want it to. And it will continue to engage and educate as long as the topic is relevant.

A study by Kapost and Eloqua in the US found that over a 24 month period, content marketing was more than three times more effective than paid search.

Final Thoughts
The World Wide Web has come a long way since the blinking text and clip art of the 1990s. It is now a dynamic medium that leads the way in which we interact and communicate.

If you’re not getting involved, you are likely to be left behind.